[Los Angeles] July 16, 2018
Donald Trump, President of The United States, met with Vladimir Putin, President of Russia today in Helsinki, Finland. The two men conferred for more time than previously planned. ABC News reported, the press in Russia considered the meeting a success and a propaganda tool for Putin at the expense of the United States. “The President of The United States was leaning in and looking uncomfortable while the President of Russia looked strong and calm.” American news outlets like Fox News called the summit “too conciliatory.” Others were more harsh. CNN called it the “The Surrender Summit. He caved.” Arizona Republican Senator Jeff Flake called the meeting “shameful.” James Clapper, Former Director of National Intelligence said, “he seemed intimidated by Vladimir Putin an arch enemy of The United States. Incredible capitulation.” 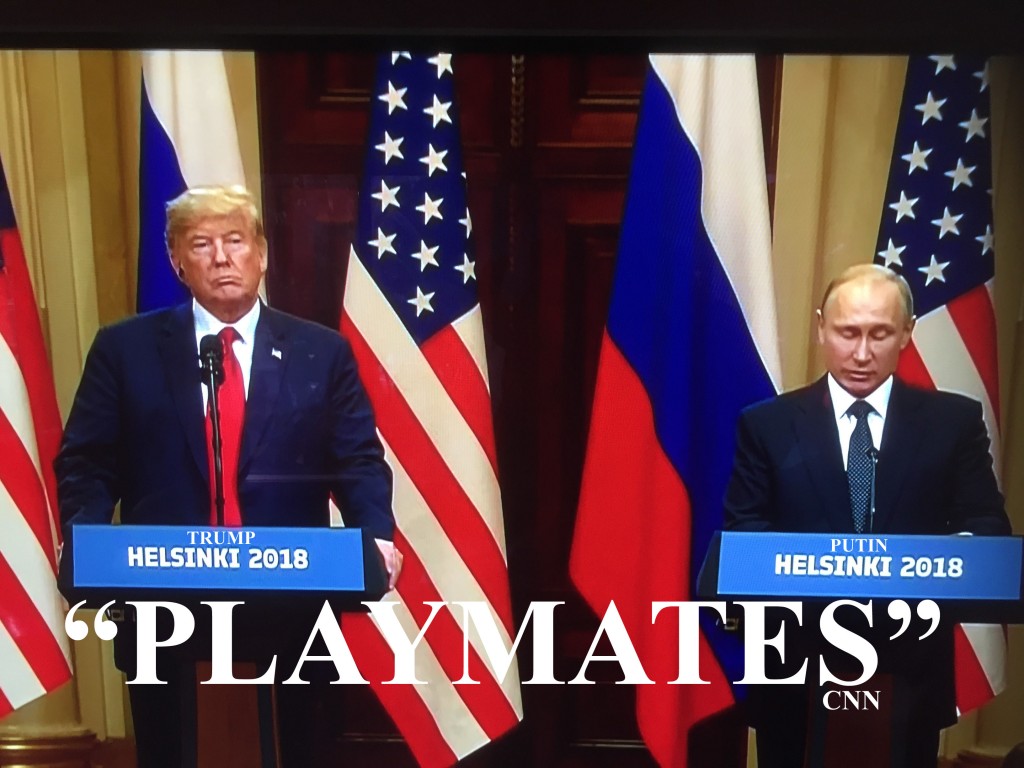 Regarding Russia’s proven meddling into the 2016 United States elections, Vladimir Putin denied “interfering in domestic affairs” of the United States. Donald Trump shortly afterwards contradicted Putin’s statement by saying Vladimir had “interesting ideas” on how to handle the recent FBI indicted Russian Intelligence Officers (12) accused of the 2016 hacking into the Democratic National Committee’s mail servers in an effort to help Donald Trump get elected President of the United States.

Putin admitted, twice, he preferred Trump over Hillary Clinton when asked by a Reuters reporter which candidate he wanted to see elected in 2016. Again, 12 Russians officers have been indicted by FBI Special Counsel Robert Mueller. All US intelligence agencies agree the Russians interfered with the US Presidential elections. Now it is known who the Russians preferred during that election.

Below are examples of a few questions posed to both Trump and Putin during a live press conference televised after the meetings:

Jeff Mason Reuters: “Mr. President you tweeted this morning that the US is accountable for the election meddling. Do you hold Russia accountable?”

Donald Trump: “I hold both countries accountable. The United States has been foolish. I do feel we have both made mistake. The [Mueller] probe is a disaster for our country. It has kept our country separted. There are no collusions. We beat her [Hillary Clinton]. We won that race. It’s a shame there is a little cloud over it…It is so ridiculous.”

Vladimir Putin: “You can trust no one. Where did you get this idea Trump trust me and I trust him? We are looking for points of contacts. We are looking for were our positions diverge and we can reconcile. Could you name a single fact that proves collusion. Just like the president said.” Putin accused US law enforcement of meddling into the election of 2016 and Trump simply stood by reactionless.

Vladimir Putin: “The public had a perception [about meddling]. The President said he wants to restore the relationship [US and Russia]. There is no evidence to the facts [Russian meddling]. Lets get back to the 12 Russian officers. I don’t know the full extent of this but I will look into this. We have an active agreement between Russian Federation and the United States that dates back to 1999 that deals with criminal cases. We initiate about 100 requests from foreign states. So this treaty has specific legal procedures we can offer that the appropriate commission, he can use this treaty to send the official request to us so we can interrogate. Moreover….we can permit members of the US to listen and we would like it to be reciprocal. We have people against the Russian Federation in the United States and we would like to speak with law enforcement there too. They transferred money to Hillary Clinton the contribution may be legal.”

Another reporter’s question to Trump: “Who do you believe your intelligence agencies or Russia?”

Donald Trump: “I have confidence in both parties.”

Donald Trump: “The FBI, where is the server, what is the server saying. All I can do is ask the I have asked President [Putin]. What happened to the servers the Pakastani gentlemen that worked on the DNC. Where are those servers. They are missing…In Russia they wouldn’t be gone so easily. What happened to Hillary’s 33,000 emails. Putin was extremely strong and powerful in his denial. I think he made…that’s an incredible offer.”

Vladimir Putin: “I was an inteligence officer myself. I know how dossiers are made out. The first thing. The second country. You think US is a democracy a democratic state? The Concorde company being accused [meddling]. This company does not represent the Russian state…We try in the courts. With Russian government officers we have a treaty – send to us and we will analyze. Let us look at.”

US Pool Reporter asks Putin: “Does the Russian government have compromising information on President Trump? And on Crimea does he believes the annex of Krimea is illegal?”

CNN’s Wolf Blitzer indicated this summit is something “I though I would never see. The President refused to side with his own law enforcement agencies over the Russian leader.”

Senator Bob Corker, Tennessee, said Putin was celebrating by “having caviar right now” and he “gained a tremendous amount from this meeting. Again it was a very good day for Putin…very sad.”

Senator John McCain, Arizona, said it was the “most disgraceful performances in memory” by a U.S. President.